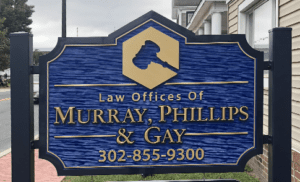 Have you been arrested in Kent County or Sussex County Delaware for a DUI at a DUI Checkpoint? Are you concerned about the fairness or legality of the DUI Checkpoints?

Do not feel discouraged if this has happened to you. While, DUI Checkpoints are legal in Delaware, but they must follow very specific laws. If those laws are not followed, a lawyer could have your charges dismissed.

Both Delaware residents and visitors to Delaware have rights. If you face an arrest for Driving Under the Influence at a DUI Checkpoint in Delaware, you need a lawyer. It is in your best interest to work with a skilled Delaware DUI Defense Lawyer. Call The Law Offices of Murray, Phillips & Gay at 302-855-9300. Or, email us here. We have more than 20 years of experience serving those accused of DUI in Kent & Sussex County, Delaware.

Delaware has an initiative called the Checkpoint Strikeforce. It is a 6-month program running each year from July 2nd-December 31st. Each weekend throughout the state there is an increased number of DUI checkpoints. The goal of the Checkpoint Strikeforce is to stop impaired, drunk or drugged driving on Delaware roads, highways, and interstates. Oftentimes, officers scatter these checkpoints throughout Kent County and Sussex County, particularly near the beach and resort areas.

Are DUI Checkpoints Conducted In Delaware?

How Often are there DUI Checkpoints In Delaware?

DUI checkpoints in the state of Delaware are conducted monthly January to June; Weekly July through December.

Who Upholds The Lawfulness Of These DUI Checkpoints?

In the state of Delaware, it is upheld under the state law and federal Constitution.

How Does A DUI Checkpoint Work In Delaware?

When you first approach the DUI checkpoint, an officer will approach your car and is to clearly address his name, and what they are currently doing. The officer may use his flashlight to check your eyes for any hints of intoxication.

The DUI checkpoint uses something called a neutral formula, so the officers at the checkpoint have to treat each driver the same, and cannot randomly stop other cars in the surrounding area.

All safety precautions (proper lighting, warning signs, signals, and the clarity of the official vehicles) are taken to ensure the quality of the checkpoint stop. Law enforcement has to make sure that the checkpoint goes as smoothly as possible, so they are not holding you up any longer than need be.

An officer cannot search your vehicle without having a probable cause, or your permission. If the officer believes you are intoxicated, he/she can ask you to take the breathalyzer test. You must comply! However, the field sobriety test may not be admissible in court.

If you refuse to take the breathalyzer test, the officer can still arrest you under probable cause, or ask you to perform a set of field sobriety exercises.

While DUI checkpoints seem like they may be a waste of time, they help keep everyone safe on the roads.

While DUI Checkpoints or DUI Roadblocks are legal in Delaware and help to keep Delaware roads safer, there are certain legal concerns regarding DUI Checkpoints. Some of them are:

If you have been arrested at a Delaware DUI checkpoint or DUI roadblock please call the Law Offices of Murray, Phillips & Gay at 302-855-9300. Or, email us here.

Click Here For More Information On DUI Checkpoints In Delaware!

No Drop-offs or Payments

By Appointment Only
Seaford, DE 19973