During this period of uncertainty, we are open and available to serve your needs.

Written by Kay Passwaters on July 15, 2020. Posted in Court School 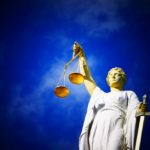 So what is the final stopping place that is the ultimate authority on Delaware law? The Delaware Supreme Court.

Interestingly, the Delaware Supreme Court is relatively new. It was established in 1951 by constitutional amendment. The first state Supreme Court initially consisted of 3 justices but was enlarged to 5 justices in 1978. The court is CURRENTLY comprised of 1 justice from Sussex County, 1 justice from Kent County and 3 justices from New Castle County. The Supreme Court is located in Dover and hears oral arguments almost every Wednesday.  Because of the volume of cases, not all cases get an oral argument, many are decided on written legal briefs.

Attorney Julianne E. Murray is experienced in oral arguments. See her in action.

Learn about other Delaware courts:

If you are in search of a good criminal defense lawyer, contact Mr. Ronald Phillips or Ms. Julianne Murray at 302-855-9300 (Georgetown) or 302-422-9300 (Milford) or 302-628-9300 (Seaford). Consequently, you may also provide your contact details via our online form and we will get back to you as soon possible. Our law firm also provides out-of-the-state representation for residents in nearby states of Maryland, Pennsylvania, New Jersey and many others.