Written by Kay Passwaters on August 4, 2017. Posted in Uncategorized

Last night, I was lucky enough to be able to attend a party to honor my friend Jay Liesener and to celebrate his upcoming trip to San Diego where we hope to fulfill his dream to surf the waters of Southern California. As I stood there interacting with all the people who came out to be a part of what has become affectionately known as Team Surfgimp, I couldn’t help but reflect on how remarkable this whole thing was. I listened to everyone talking about how they came to know Jay and what an impact he and his wife Mel have had on them, and I did some reflecting of my own. 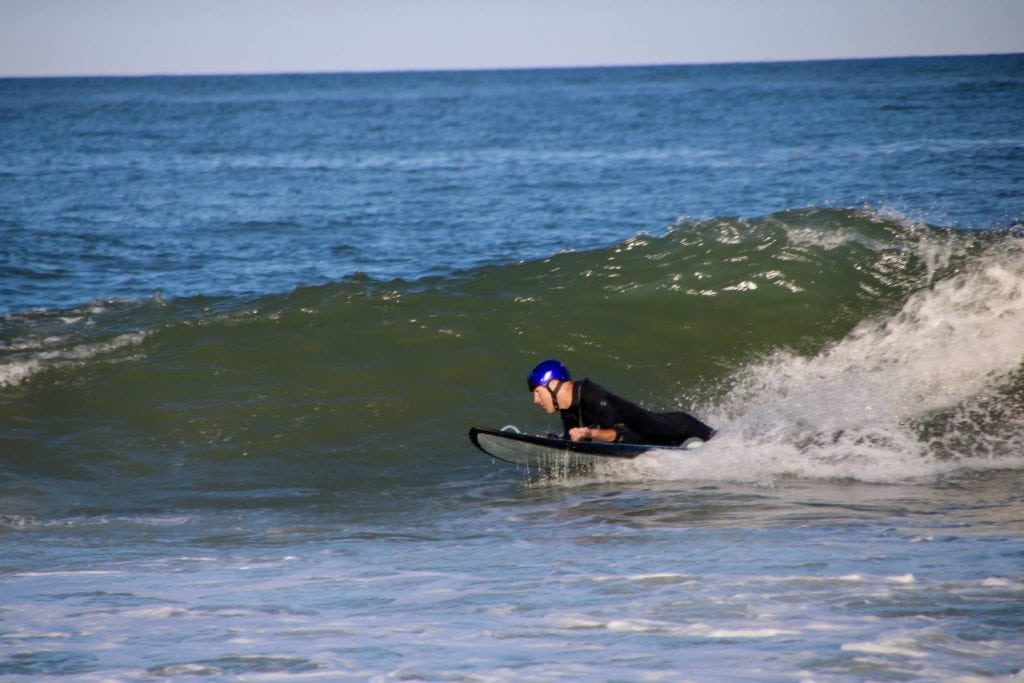 As I stood there with my thoughts, I contemplated what Jay’s lasting legacy will be. For sure, Jay is a remarkable person. With his never give up spirit, he has found a way to do things most people only dream of. In addition to surfing, he became a college professor, he has traveled, he drives and he has even gone hang gliding. All that he has done is amazing and I am sure it has had an impact farther than anyone even knows. But as I looked around, I realized that Jay’s legacy is much more than living life to the fullest and performing incredible feats. Jay’s lasting legacy will be how he has brought people together. Last night was an incredible example of that legacy.

So many people have come together through Jay and Mel’s sand family that would never have crossed paths otherwise, let alone get to know, love and care about each other. Regardless of political, social or ideological viewpoints, Team Surfgimp has brought people together in the name of love. Instead of focusing on our differences, Jay makes us focus on what we have in common, each other.

Jay has developed a circle of friends that is incredibly diverse and those friends have in turn developed their own friendships within that circle and expanded it even further. In the past, I have referred to our group as a bunch of “misfits”. That is probably an unfair characterization because it suggests that there is something wrong with each of us.  While it may be true that all of us have an issue or two (or more) and we don’t look alike, think alike or have the same background, we accept each other where we are and how we are. That my friends, is something pretty special and I am fortunate to be a part of it.

So, in my humble opinion, Jay’s legacy is not what he has done in the water, it’s what he has done amongst us. He has made each of us better by bringing us together. By letting us share his stoke, we are all able to share our love for one another and that is a legacy that will last long after our surfing days are over.

Ron Phillips has been a lifeguard for 34 years and a surfer for 36. He is an attorney and partner in the law firm of the Law Offices of Murray, Phillips & Gay