Written by Kay Passwaters on May 22, 2020. Posted in Uncategorized

So…Memorial Day.  I think that many people miss what it is really about.  Most people associate Memorial Day with the beginning of summer, barbecues and a cool 3 day weekend.  All of these are true but I want to make sure that people know that there is more to it.  So here is a mini-history lesson – Memorial Day was originally known as Decoration Day and originated after the Civil War to commemorate the fallen Union soldiers.   By the 20th century, Memorial Day had been extended to honor all Americans who have died in all wars. It is actually a somber occasion where we are supposed to remember and honor the men and women in our country that have died for our constitutionally protected freedom. 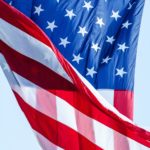 Since Memorial Day is just a few days away, I thought I would make sure people are aware of how the American flag should be treated on that holiday.  On Monday you need to raise your flag to the top of the staff and then slowly lower it to half-staff.  It should be flown at half-staff until noon and then raised to the top of the staff. The half-staff position remembers the more than one million men and women who have given their lives in service of their country.  The tradition is that at noon their memory is raised by the living, who resolve not to let their sacrifice be in vain, but to rise up and continue the fight for liberty and justice.